Competency Tests for Politicians Worth Considering

Brad Wood—Individuals running for public office, whether municipally, provincially, or federally, should be required to write some sort of competency test.

Often you will find a candidate off the street who manages to run and either be acclaimed if unchallenged in the electoral district or garner enough votes to get into office, solely by aligning him or herself with a certain party.

We are then left with an individual in a public position, responsible for making decisions regarding copious amounts of public money, and directing the state of our municipality, province or country, an individual who may have barely made it through high school. 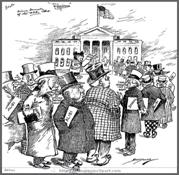 What do we end up with? Uneducated, uninformed, and ill-suited candidates running the country, and leaving us with the problems and scandals that we see wreaking havoc on the country in the headlines of today.

By mandating that all individuals who wish to throw their names in the political ring to run for a position write an aptitude test, we can assure that our candidates are suitable for the job.

We will also be able to use the scored grades to assess candidates against one another to help in deciding how we should cast our votes.

Tuition Freeze Needs to be Evaluated

Dustin Dufour—The tuition freeze policy of the Manitoba government is being questioned more vocally by the one group the policy was designed to help students.

Tuition remains frozen at 1999 levels, following nearly a decade of increases by the previous government under Progressive Conservative Premier Gary Filmon. The goal is to help more students gain access to university.

More people are signing up at Manitoba's universities. Unfortunately, Manitoba Universities are claiming that the province is not giving them enough money. Without the ability to raise tuition directly and being forbidden to run deficits, one option they have is to cut programming. Cuts in science, for instance, mean that in a few years the school will no longer have the staff to offer a degree in physics.

The university is also making up for the cash shortfall by charging more ancillary fees. This year's increases amount to over $400, more than any one-year increase under the Filmon government, according to the Canadian Federation of Students.

You'd never know this was a problem from talking to current premier Gary Doer, however. He likes to talk about what a wonderful person he is for freezing tuition. The tuition freeze, however, is false advertising. From a student's point of view, if one has to pay an extra $400, it doesn't matter whether it's in the form of increased tuition or increased ancillary fees; an extra $400 is an extra $400, period.

Doer has also undermined the credibility of the freeze itself. Students see that they pay more fees and their education. You get what you pay for, many believe. I personally don't believe that.

On one front, being university student costs money. Many do not receive scholarships or bursaries. Those who live on their own often work part-time at low wage jobs for money not only to pay for school, but also for living expenses.

Those who take out student loans are stuck with a heavy debt before they have a chance to earn a decent income, much of which is eaten up by student loan payments for years to come.

Those students who have children have additional expense to worry about. So, to me, low tuition is a matter of economic justice.

On the second front, the province can do more. The shortfall at Brandon University was estimated at $2 million, yet the province projects a $314 million surplus.

Provinces often blame federal cut-backs for raising tuition, but this particular case is not the fault of the federal government.

Manitoba Liberal Leader Jon Gerrard said "no one would be upset if the government had put away a $312 million surplus and gave Brandon University $2 million."

As an NDP supporter, I find it frustrating that a Liberal is criticizing an NDP government by saying something the NDP would certainly say if they weren't the governing party.

I think that the government must seriously re-examine the tuition freeze policy and meeting the challenges of affordable education before their critics can capitalize on its failings.