Bernie Peloquin—Two days before Star Wars Episode III: Revenge of the Sith was released in theatres, Play-station 2 and Xbox gamers were given a first look into the film with its video game adaptation of the same title.

Revenge of the Sith is a third-person hack-and-slash action game by The Collective, the production company responsible for the highly criticized Slayer engine. The Collective first used Slayer for Buffy the Vampire Slayer and later Indiana Jones and the Emperor's Tomb, giving all three games a similar feel.

The most noticeable feature of Revenge of the Sith is that The Collective didn't make original in-game movies or cut scenes, but instead used key scenes taken directly from the film. The plot line is also synchronous with the movie, with the exception of a short un-lockable alternate ending.

The game features 15 levels, as well as a few bonus levels and a multiplayer light-saber duel mode, which is entertaining enough to be its only redeeming quality. The levels themselves are short, about 10-20 minutes each, so an experienced gamer can complete the entire game in about five hours.

Typically, Star Wars games in the past have focused on either Jedi abilities or spacecraft battles, but Revenge of the Sith seems to depend on long light-saber battles, which are easily exploited due to an extremely limited set of commands. Gamers will also be disappointed to discover that their characters will only be able to use three or four Jedi powers.

It seems, sadly, that the game has been hastily and sloppily designed as an impulse buy for hardcore Star Wars fans who can't wait for the movie to find out what happens. The apparent lack of effort involved in its development confirms The Collective's reputation as a company specializing in the exploitation of pre-existing plots and established characters from other media.

Revenge of the Sith retails for $49.99 in stores or around $37 on eBay, and joins the dark side of the gaming industry alongside a growing list of mediocre titles by The Collective.

Bernie Peloquin—Green Day, the Berkley based punk-rock act, has taken it upon themselves to prove that they deserve a multi-platinum album, a subsequent Grammy and the label, "best rock act on the planet". On May 17 the band treated 30,000 fans at the MTS Center in Winnipeg to a show they will never forget.

The group, consisting of Billie Joe Armstrong (Guitar), Mike Dirnt (Bass) and Tre Cool (Drums) stormed the stage at shortly after 8 p.m. to greet the raging masses with the titled track off their latest album, "American Idiot". With a series of lights and explosions, the band continued to hammer out hits from their critically acclaimed album, including the nine and a half minute epic, "Jesus of Suburbia," and anti-Bush, "Holiday." The band continued through an energetic set, which included new and old favorites such as "Hitchin' a Ride," "Basket Case," Brain Stew" and "She" while securing the crowd's attention with every strategically placed "wave" or sing-along. 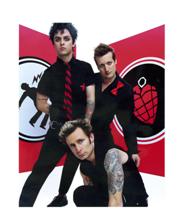 Green Day also gave lucky fans a chance to be a rock star and play the instruments during their cover of Operations Ivy's "Knowledge." Aspiring guitar, bass and drum players were pulled from the audience to play on the big stage, and as a bonus the guitar player got to keep the guitar. The band finished up the set with "King for a Day," which included bits and pieces of the soul song, "Shout," and "Minority".

The band has truly established itself in the music world, and it is evident at every city that this tour stops in.

Billie Joe has written some of the most catchy, yet painfully obvious melodies of our time, and is backed up by the tightest band in the live scene. With an act like this fans will be asking to see them again and again.

Following the hour and a half main set, that's just what the crowd did; at their fans' request, the band returned amidst a boisterous "Green Day" chant to jam out "Maria", "Boulevard of Broken Dreams" and an enthusiastic sing along of Queen's "We are the Champions" for the encore.

Green Day played the hits and kept a monstrous crowd under their command for every single minute of the show.

New Jersey mascara band, My Chemical Romance, opened the night with a half hour set including their successful hit "Helena" and new single "I'm not OK." The band is currently touring in support of their debut album, "Three Cheers for Sweet Revenge."

The band performed well, considering only half of the seats were full for their set, and that all 30,000 were there to witness the unstoppable Green Day.